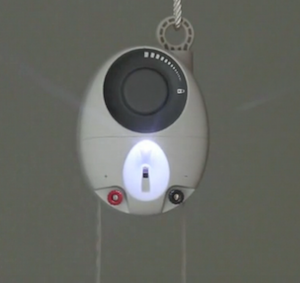 GravityLight is a lighting alternative to dangerous and costly kerosene lamps. With the GravityLight, light is produced by the force of gravity. As a weight (approximately 10kg bag of rocks) descends, it is attached to a cord which powers the light. The weight produces light the entire time it is falling - about 15 to 30 minutes. The weight can be immediately raised and allowed to descend again for continued light.

The intention is that the basic, lowest cost GravityLight will have a built in LED light, for general illumination. It has screw terminals which enable a wire to be connected with several additional LED lights along its length for additional ambient lighting, at the end of which is a more powerful light to be used as a task light, which can be hung over a table, or pointed like a torch.