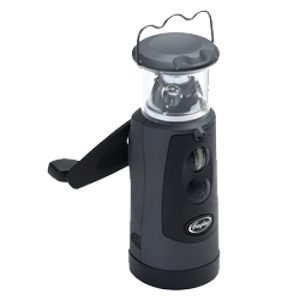 Freeplay's new Indigo LED Lantern is a self-sufficient rechargeable lantern that answers many portable lighting needs and is environmentally friendly.

The Indigo Lantern features a cluster of ultra-bright LEDs as the primary light source for space illumination, and also has a single-LED directional light source for use as a reading light or flashlight. In addition to wall recharging ability, you can power it yourself using the trusted Freeplay self-charge technology, so you'll never run out of power. That, combined with the reliability of ultra-bright white LEDs rated for 100,000 hours, makes the Indigo Lantern the most dependable lantern on the market. With the peace of mind of never needing to ever replace batteries or bulbs, you'll know that your Indigo Lantern will work whenever you need it, anytime, anywhere. Yet you'll have excellent brightness and shine time.

Ideal for everyday and emergency use, indoors and out, the Indigo Lantern puts the power in your hands. The self-charge system offers maximum dependability for those times when you can’t afford to be left in the dark by dead batteries. A quick wind (about 60 seconds) provides up to 1 hour of light using the directional light – and you can wind again at any time for as much shine-time as you want. An LED charge level indicator tells you the optimal winding speed.

The included reading light / flashlight is also an LED with excellent performance, delivering an hour of brilliant white light per 60-second wind.

The Indigo Lantern is rechargeable and, when fully charged, the lantern provides up to 8 hours of continuous ultra bright light, and 100 hours of night-light, using the LED cluster. Similarly the directional light will shine for up to 40 hours continuously.

The rechargeable battery means that there is no use of disposable batteries that are harmful to the environment. Not even for "spare power": you are the spare power.

Internal mechanical components are specified to industrial standards for repeated use and long life. A handle swings up to let you to carry or hang the lantern as required, and the sturdy rubber feet allow for placement on uneven surfaces.

With the Freeplay Indigo Lantern, you’ve got light anytime, anywhere.

It was whilst watching a BBC documentary in April 1994 when Chris Staines first realized the potential of an innovative idea from British inventor, Trevor Baylis. "The Clockwork Radio", as the device was first known, was proposed as a means of halting the spread of Aids in Africa through better education. Traditional radio, although widespread, relied on an electrical supply or the availability of disposable batteries - both of which were in short supply across the continent.Chris and his business partner, Rory Stear, immediately realised that the potential for self-sufficient electronics could go much further than radio and Africa. And so the "self-sufficient electronics industry", and the Freeplay Energy Group (the company formed to develop the idea) were born.