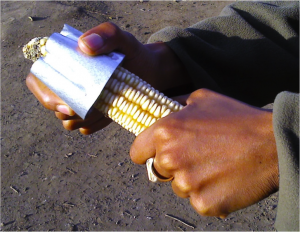 The corn sheller is a simple tool that makes it possible to shell maize several times faster than by hand. The device has the additional advantages of being robust, portable and transparent to users. A corn sheller can be made at a fraction of the cost of market alternatives.

The D-Lab program at MIT, in collaboration with their community partners, has developed several versions of the maize sheller that can be made using locally available materials and methods. The process requires only a hammer, pliers and a tool to cut the sheet metal into the appropriate size to accommodate the local varieties of maize.

A corn sheller can be made by forming ridges on a curved piece of sheet metal. It can also be made by using a straight piece of sheet metal with tapered ridges to produce a similar surface. A simple jig was also developed for making these shellers quickly and easily (see link to additional documentation, below).

Maize (corn) is one of the most important staple crops in the world. In Kenya, for example, 45% of the population considers Ugali (maize meal) to be their survival food, making it the most consumed food of the country. Maize also accounts for 43% of the Latin American diet. In Asia, maize production is over 200 billion kilograms a year and it is expected that the total maize production in developing countries will eventually overtake production in industrialized countries.

In many rural areas of developing countries, maize kernels are removed from the cob by hand in a process called shelling. Shelling the annual maize harvest by hand typically takes weeks and may pull children out of school, since processing food for survival takes priority over education in subsistence farming households. The hardened, dry maize can also be painful to shell and lead to hand injuries.

Existing alternatives to shelling maize by hand are often unaffordable or difficult to obtain for subsistence farmers. An estimated 550 million small- holder farmers in the world lack access to mechanized agricultural technology.