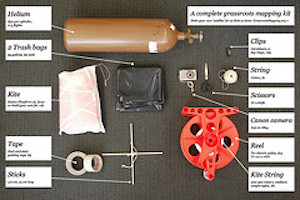 In January of 2010, Jeffrey Warren of the MIT Media Lab and the Center for Future Civic Media worked with a series of organizations and communities to produce maps with children and adults from several communities in Lima, including the Cantagallo settlement of Shipibo on the bank of the Rimac and the Juan Pablo II community in Villa El Salvador.

Seeking to invert the traditional power structure of cartography, the grassroots mappers used helium balloons and kites to loft their own “community satellites” made with inexpensive cameras. The resulting images, which are owned by the residents, are georeferenced and stitched into maps which are 100x higher resolution that those offered by Google, at extremely low cost. In some cases these maps may be used to support residents’ claims to land title. By creating open-source tools to include everyday people in exploring and defining their own geography, Warren hopes to enable a diverse set of alternative agendas and practices, and to emphasize the fundamentally narrative and subjective aspects of mapping over its use as a medium of control.

Publicly available: no
Countries where available: Worldwide
Price range (USD): Free
Offered or can be licensed for local manufacture: Yes, this is largely a do-it-yourself solution

If you are aware of any updates to the Grassroots Mapping, Balloon Aerial Photography project please complete the form or send an email to [email protected]