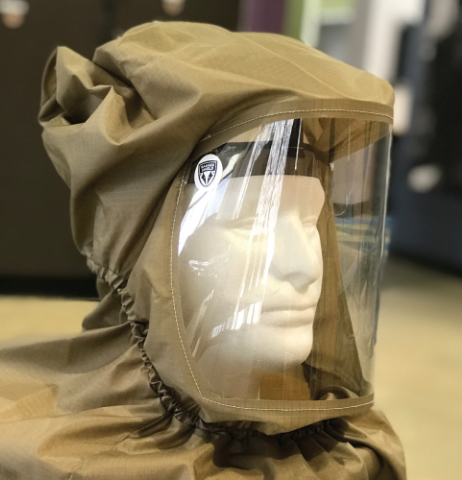 This is an Air Purifying Respirator (PAPR) hood.

The hood is designed to be worn by medical staff and is used to filter air and inflate a bubble around the wearer’s head to reject any contaminants. The hoods connect to commercial blowers typically owned by hospitals.

The PAPR hood can be cleaned and reused.

PAPRs were originally designed for use in industry and manufacturing for activities like auto body painting, welding, and other tasks that create noxious fumes. They consist of a belt worn blower that is battery powered. It uses a filter similar to the ones used in N95/N99 masks to filter room air and deliver it through a flexible hose fitted on the back of the hood. The air then inflates the hood, creating positive pressure that inhibits unfiltered air from entering the hood. The air then escapes through a neck opening into the wearers clothes.

The hood design and manufacturing guidance has been published as open source, freely available documentation, such that those in need can manufacture boxes themselves. Hoods are also available through an intake request form on the Makerspace.

In mid-March, UW Health contacted the Makerspace with their top 10 needs for infection control. Number two on the list was a PAPR system. In early April, UW Health received 1,000 hoods from the federal reserve. At first, they believed these hoods would serve their needs if they were provided with an adapter to connect to a 3M blower hose. After further review, the lack of shoulder drape proved to be a deal breaker and they asked once more for the Badger Shield team to prioritize the creation of hoods. The hoods are intended to be used by high-risk healthcare professionals, particularly for the anesthesia group to wear during intubations.

Team Disclaimer:
This product design and specifications are being provided by the University of Wisconsin-Madison College of Engineering as a free service to the community during this public health emergency. This product has not been cleared for medical use by the U.S. Food and Drug Administration. The product should only be used during the declared COVID-19 public health emergency if FDA cleared or approved products are unavailable.

Publicly available: Yes
Countries where available: This is an open source, freely available design
Price range: Free
Offered or can be licensed for local manufacture: Yes