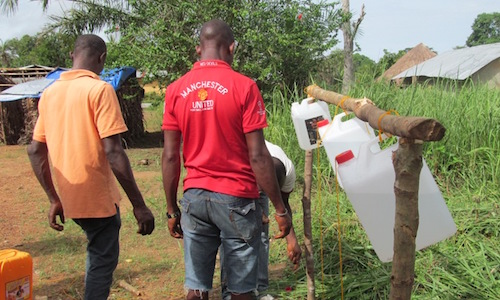 In 2014, Sierra Leone had the highest child mortality rate in the world, with diarrhea among the primary causes for death in children under five years old. Further exacerbated by the recent ebola outbreak, Sierra Leone’s health crisis persists due to a lack of basic infrastructure, especially in the areas of water and sanitation. By simply adopting good hand washing practices, however, it is possible to greatly reduce the number of illnesses and deaths caused by preventable diseases and infections.

TEL worked with COMIN-SL to conduct community-based needs assessments, which led to the identification of the Tippy Tap as an appropriate and cost-effective solution. TEL also provided COMIN-SL with the necessary technical information for local implementation.

COMIN-SL installed two Tippy Tap hand washing stations within a primary school and a community health center outside of Freetown. Maintained by these two institutions, the Tippy Taps continue to serve over 400 community members.