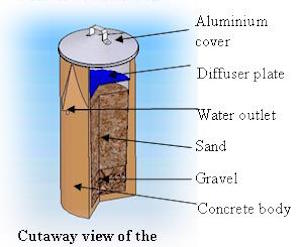 The Bio-Sand Filter (BSF) is basically a container partially filled with graded sand and gravel. Water is poured into the top of the unit and is filtered as it passes through the sand. The raw water is biologically improved partially through predation in the biological or 'schmutzdecke' layer as well as the sand providing a natural mechanical barrier.

The mould unit is an all steel construction manufactured to a high quality and finish. The main parts of the mould unit are shown in the exploded view below, these are: 1) the puller, 2) an inner mould, and 3) outer mould. The mould is simply bolted together, turned upside down and fitted with a copper outlet pipe. A concrete mix is then poured in the mould and compacted down. After several hours the puller is used to remove the inner mould after which the outer mould can be removed revealing the finished filter shell. The filter is then filled with sand and gravel layers.

Contaminated water is poured into the unit at the top. The water passes through the diffuser plate and the sand and gravel layers. Head pressure pushes water through the copper pipe in the base to the outlet point. Biological contamination is reduced through the actions of adsorption; mechanical filtering, predation (‘biological layer’) and natural die off. The actual round concrete BSF units produced are approximately 915mm high with an outer and inner diameter of 355mm and 295mm respectively. The filter depth is approximately 450mm with a surface area of around 0.07m2. The designed flow rate for the filter is around 0.6ltr/minute. Design and production work of the latest round BSF mould is on going at present.

Ideas at Work recognized that the square BSF units typically used within Cambodia were extremely costly and very heavy. To improve this IaW were keen to follow the experience of Medair and their round BSF because of the advantages that this type of unit offered. Typical cost for square filters moulds made by local workshops and other NGO’s have been around $350. To reduce the cost of the roundB SF mould we are urrently working on utilizing and making modifications to existing moulds used for producing cement pipes (for storm drainage). These basic moulds cost around $85 for the standard mould and are widely available throughout the country and the skills and production facilities for making these are well established. These standard pipe moulds can be modified to allow the base to be sealed off and to add the additional nose cone as standard. The cost of final modified mould is estimated to be around $150 which is less than 50% of the square filter moulds. The amount of concrete used in the round filter is around 20% less as well which provides significant savings on materials costs as well.