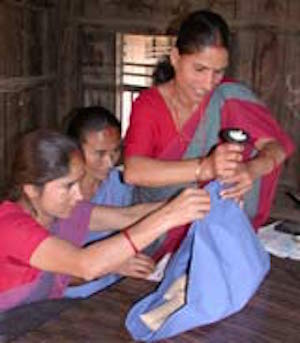 Low birth weight is the invisible undertow for infants in the developing world, where 95 percent of underweight children are born. Babies who don’t weigh enough at birth are terribly vulnerable. Their bodies are not strong, and they may have a difficult time breathing, eating, gaining weight, and fighting infection. Babies who weigh less than 2.5 kg at birth are approximately 20 times more likely to die than heavier infants.

Many babies in the developing world are delivered at home, by traditional birth attendants or midwives who may lack the training and tools to recognize low birth weight. PATH’s BIRTHweigh scale helps low-literate health workers identify low-birthweight children immediately. Once identified, these infants can be given care, such as immediate breastfeeding and warming, or referred for higher levels of medical care. The BIRTHweigh scale compensates for low levels of literacy by supplying pictorial instructions for use. It depends on a simple indicator for low birth weight and is easy to use; little training is required, allowing health workers in the developing world to detect low birth weight in infants before complications arise.

To use the BIRTHweigh scale, health workers place the baby in a secure sling that is suspended by a hook on the scale. Instead of the common digital or dial readouts that report an infant’s exact weight, the first version of the scale had a window that shows yellow if the baby’s weight is too low and blue if the baby weighs at least 2.5 kg, the desired weight for a healthy newborn.

During tests in Indonesia—where 250,000 Indonesian infants die each year from preventable illnesses—we found that during night deliveries, in huts with little or no lighting, birth attendants were unable see the color change. PATH took the recommendations of the midwives and field testers and modified the scale to include a tactile indicator on the top of the handle. The indicator button sinks into the grip if the baby weighs at least 2.5 kilograms, and birth attendants can feel whether babies are at a healthy weight, even in the dark.

Most recently, in response to new technologies that may allow newborns to be treated successfully in the home, PATH designed a new version of the scale, one that can identify three different weight categories. Each of these weight categories corresponds to a different dose of gentamicin, a drug used to treat severe bacterial infections. This version of the scale gives health workers a reliable tool for gauging how much medication to give a sick child. It empowers more workers to administer the drug and reduces the risk that the wrong dose will be given.

Prototypes of PATH’s latest version of the BIRTHweigh scale, which is in a stage of active development, were successfully field-tested for accuracy and acceptability in Nepal and India in 2004. The scale is designed for local production and distribution, to reduce costs and stimulate economic development in the countries where the scale is used. One of the earlier versions of the scale is already in use in many countries and for sale through UNICEF under the name “BebeWey.” We are currently seeking a manufacturer to whom we can transfer the technology for the latest version, so that it will be readily available to community health workers who care for infants suffering from severe infection.